Autumn Browne lives for drama. Her career has spanned television journalism, comedy, modeling and acting. But for more than two decades, she has been a teacher at Brookhurst Junior High School in Anaheim.

Browne, a 23-year CalSTRS member, says she never wanted to be a teacher. “I really wanted to have a job, and being a journalist meant I could work anywhere in the world and still be on camera.”

Life as a drama teacher

Browne doesn’t teach in a typical classroom. Instead, she uses a large room with a stage, so her students can put on productions several times a year. “Using the stage as a classroom makes it familiar to kids so it won’t be as intimidating to get up there in front of an audience.”

Students who return years later tell her how her classes changed their lives. “I have kids who are police officers and doctors and architects who tell me they still remember an exercise we did on relaxation or still use something else today.”

Several of her students went on to study drama in high school and college and are active in community theater. One former student recently dropped by her classroom as a surprise—Justice Smith, the star of the new movie Pokémon: Detective Pikachu. He also had a major role in Jurassic World: Fallen Kingdom and played the lead role in The Get Down, a musical television series set in the ’70s.

“The kids were in awe. I have a little shrine of him,” Browne said. He told her students that his first acting job was in her classroom, and that he first decided to become an actor when Browne cast him in a Christmas play.

Life as an actor

Autumn Browne is with a group of students. She takes her students to Hollywood every year for a studio tour, four shows, an acting class and sightseeing.

Browne first worked at a Long Beach television station, doing news and weather. “I was a big celebrity at the Jack in the Box,” she joked. After a couple of years, she moved to Hollywood and took acting lessons. Browne was featured in many national commercials and had roles in “episodic TV and forgettable movies.” She even tried her hand at stand-up comedy.

“The very first time I went to do stand-up, it was 1 a.m. One person was there, and he was waiting to go on after me.”

Browne worked her way up to bigger gigs and became a regular with an improv group, the Comedy Store Players. “I was enjoying my life but it was not steady work, and I didn’t have health insurance and all of that. I started working as a tour guide, taking people on national park tours.”

Browne also gave celebrity tours and had an unofficial business as secretary to the stars. Regular clients included Joan Rivers and Eva Gabor.

Rivers gave Browne old comedy material from when she first started her career in the 1950s. “A lot of it was dated, but I cobbled together a routine. As I got my confidence up, more of my stuff went in and hers went out, like being single, living in Hollywood and being a redhead.”

Browne tries to act in or direct at least one show outside of school a year. This year, she’s doing both. “I love being on stage and showing students I’m doing exactly what I’m telling them to do. And when they come see me on stage, that’s exciting.”

Browne also takes her students to Hollywood each year for a studio tour, four shows, an acting class and sightseeing. “For many kids, it’s the first time they’ve been in a hotel and have been away from home,” she said.

She also talks about her career with students and gives a lesson on headshots, showing students her own photos from commercials, modeling and movies. “The kids get a kick out of it and they’ll ask, ‘How old are you? You looked so young.’”

One of Browne’s previous jobs involved setting up seminars for teachers, which is how she met her first husband, who suggested she become a teacher. “I told him, ‘You’ve got to be kidding me. I don’t want to go back to school. And I don’t want to be a teacher.’”

She went back to school and did student teaching. “I was right—I didn’t like teaching. But then I got divorced and I realized I needed a job. I started subbing, thinking I would just do this until I could figure out what to do.”

She enjoyed subbing as a speech teacher one semester, but another semester, she took over a middle school math class. “Those kids still probably can’t add or subtract. I was one step ahead of them. We acted out math.”

She eventually landed an English and drama position, and each year she got rid of an English class, until all she taught was drama.

“I’ve heard high school teachers say nobody wants to teach middle school, but my student teaching was in high school. When I got to seventh and eighth grade, I started enjoying myself,” Browne said.

Her mother, Gloria Maxwell, is a theater actor. “She always supported me when I wanted to be an actor—giving me money, doing my laundry.” Browne had the opportunity to direct her mom in a production and they still go to shows together every year.

She met her husband, Michael Buss, a playwright and software company owner, when she was hired to direct one of his plays. “We’ll be married 20 years next summer.” He also acts and directs and writes material for her students to perform.

In 2018, Browne ran for California’s 69th State Assembly district. It was her third run for office. While she didn’t win, she got more than 20,000 votes, which was more than she expected, thanks to getting the word out through emails, lawn signs and fundraising. She jokes she could account for eight of those votes herself, thanks to friends and family.

“It was exciting. People keep asking me are you going to run next time around? My husband says I am. We will see. It’s two years away. I don’t have to think about that now.”

In 2000, Browne was happy to be on the same ballot as her father, the late Harry Browne, who was the Libertarian presidential nominee. “I cried at the ballot box.”

Who inspired you as a teacher?

Browne took inspiration from her high school English teacher in Tustin. “She taught fiction of the future—1984 and Fahrenheit 451 and books like that. I loved her. She was fun and she was older. By the time I was a teacher, she was retired. I sent her a letter through her district.”

“I thought this might be my last year, but I’m not ready to leave. We’ll see about next year. Do I still love doing what I’m doing? Yes. I would say most of my students are fantastic and wonderful and want to be there,” Browne said.

She says people keep telling her she can go back to acting, but she always responds, “I’m still acting.” Now comedy, that’s a different matter. “I would love to get back up on stage. I do like telling comedic stories, but at my age, I would have to start at the bottom, going to open mic nights,” Browne said.

Not wanting to leave teaching behind, Browne hopes she can teach at the college level. “They’re going to need someone to teach the new drama teaching credential. I would like to teach an improv or acting class, where I’m only working a few hours a week.” 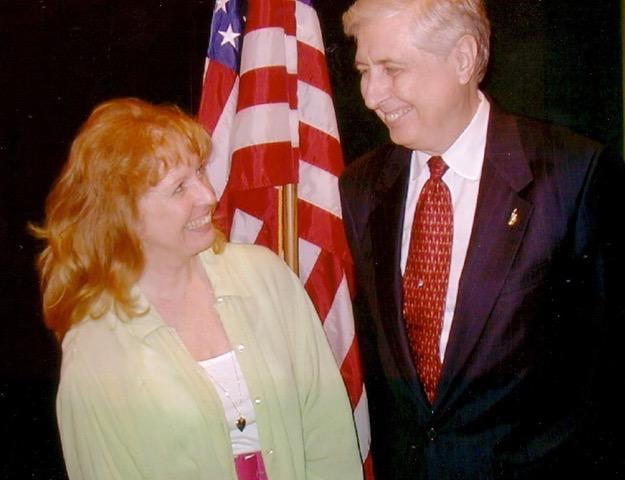 Autumn Browne poses with her father, Harry Browne, who was the presidential Libertarian nominee in three elections. Browne, who has run for election three times herself, was proud to be on the same ballot as her father in 2000. "I cried at the ballot box." 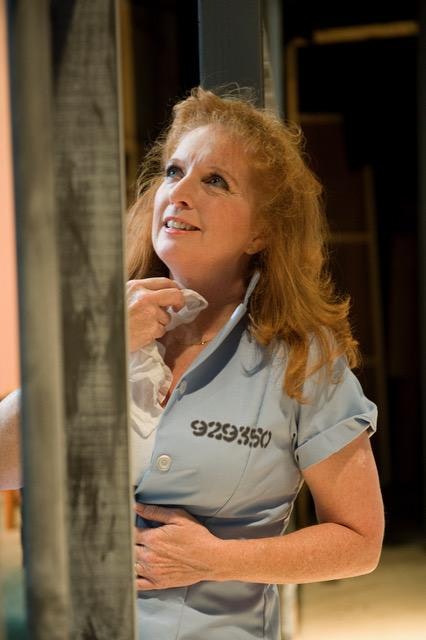 Autumn Browne played a southern belle in “Women Behind Bars” at Stages Theatre. 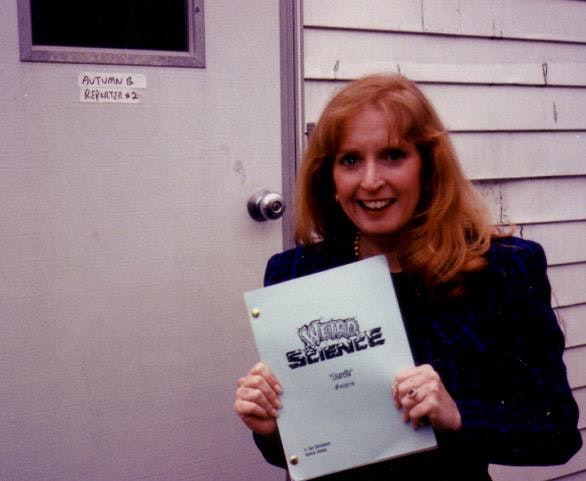 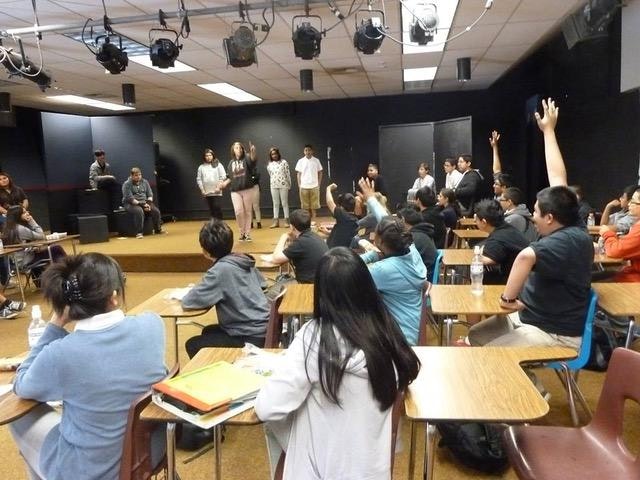 Autumn Browne's classroom is a large room with a stage, so her students can put on productions several times a year. 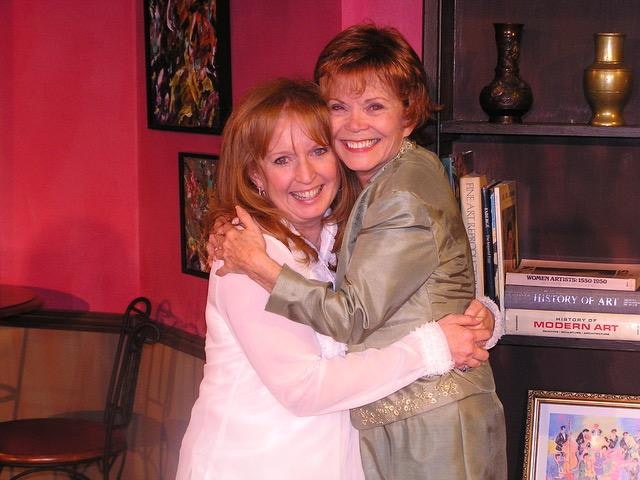 Autumn Browne hugs her mother, theater actor Gloria Maxwell. Browne has directed her mother in a production. They still go to shows together. 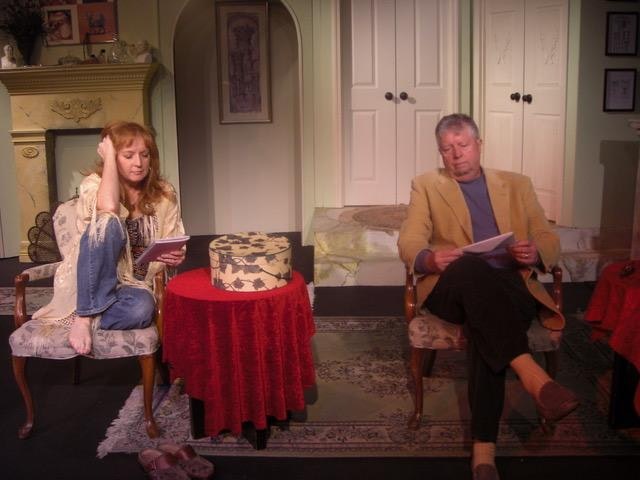 Teacher and actor Autumn Browne is on the set of "Love Letters" with her husband, playwright and actor Michael Buss. 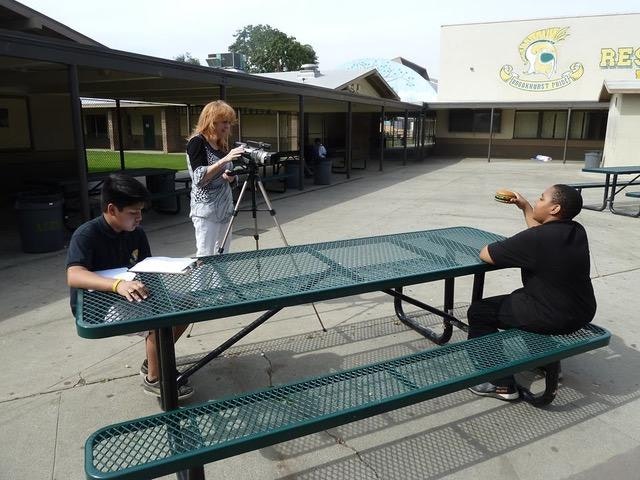 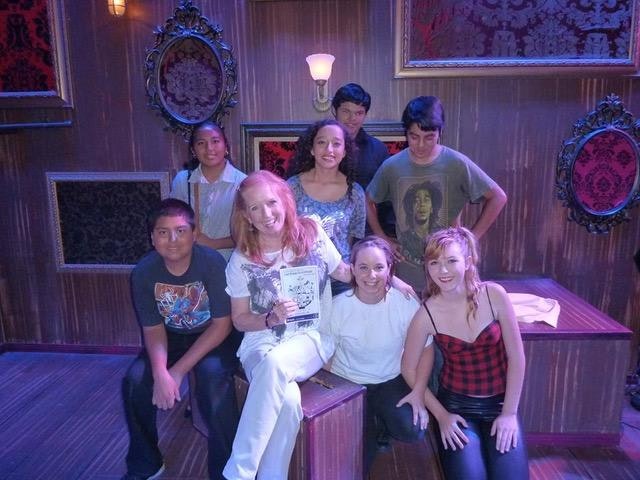 Autumn Browne is with a group of students. She takes her students to Hollywood every year for a studio tour, four shows, an acting class and sightseeing. 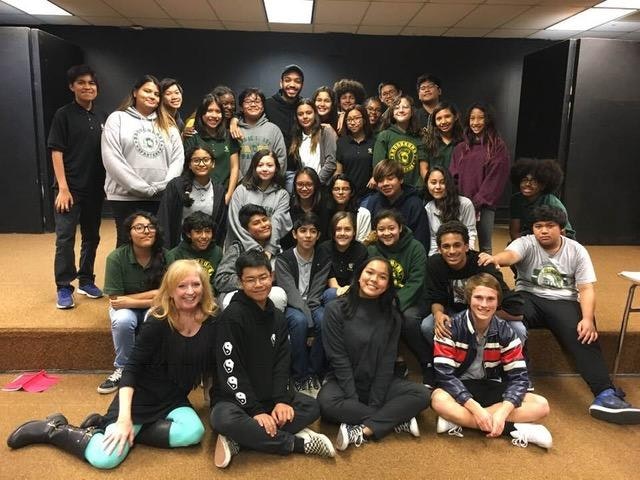 Actor Justice Smith drops by Autumn Browne's classroom. Browne gave the Pokemon movie and The Get Down TV show star his first acting role in a Christmas play. 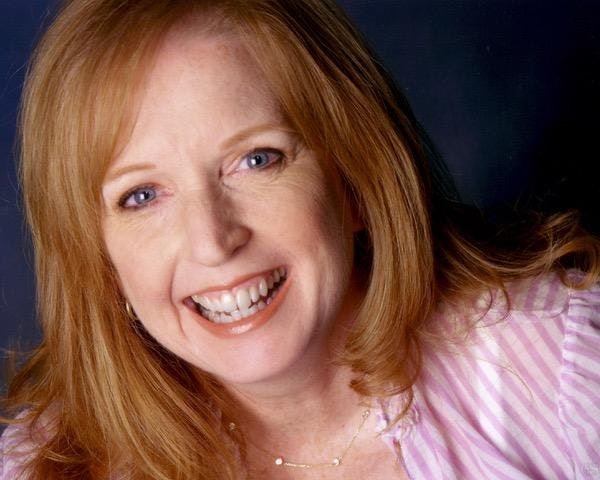 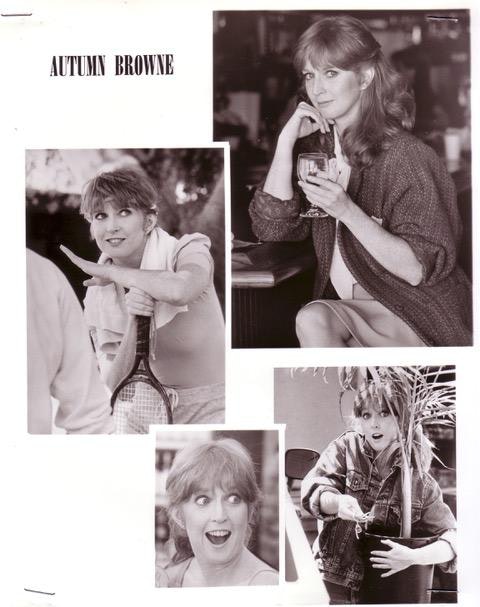 Autumn Browne worked on commercials, television and movies. This is a composite of photos early in her career.

Autumn Browne lives for drama. Her career has spanned television journalism, comedy, modeling and acting. But for more than two decades, she has been a teacher at Brookhurst Junior High School in Anaheim.

This photo gallery shares images of Autumn Browne and her students as well as her acting career. Please select each image in the gallery to see a larger, uncropped version of the photo.

Teacher Talk is a series of profiles on California teachers and other educators. To be considered for a future profile, please email Communications@CalSTRS.com, with Teacher Talk in the subject line.

Teacher Talk is a series of profiles on California teachers and other educators.

CalSTRS is fully committed to providing accessible facilities, elements and channels of communication to all members of the public. As part of this commitment, CalSTRS has a policy of providing an accessible website compatible with the Web Content Accessibility Guidelines (WCAG 2.1) and commercial screen reading software. All features of the website are coded to allow individuals with vision and other impairments to understand and use the website to the same degree as someone without disabilities. We welcome feedback and can often resolve issues in a timely manner if they arise.

If you need any special assistance or accommodations

In addition to testing with users with a wide range of disabilities and coding our website to WCAG standards, CalSTRS regularly scans its website to ensure ongoing compliance, and makes timely changes to any inaccessible changes, if any are found. In our ongoing commitment to transparency, we make the last three months' reports available to the public.

Please note that this site may link out to third-party websites, such as state or federal agencies, that do not have accessible content. This site may also include documents provided by third parties included in our agenda packets, for example. While we cannot control the accessibility of content provided by third parties, we are happy to assist any member of the public with reading and accessing content on our site.

See an opportunity for us to improve? Please contact our accessibility officer or call us at 800-228-5453.

We are committed to your ability to access all content, and we will respond to all requests as soon as possible.

Thank you for reporting this accessibility issue. We'll be in touch soon.
There was an error saving your report. Please make sure you have entered all required fields and try again.
This site is protected by hCaptcha and its Privacy Policy and Terms of Service apply.